Dickens and Christmas are inextricably linked. But I don’t think of Bob Cratchit, Scrooge and Tiny Tim. It’s Oliver Twist who comes to mind during December. The Radio City Christmas Spectacular used to show feature films following the Rockettes’ March of the Wooden Soldiers and Living Nativity. I have yet to confirm with Mom and Dad, but I think that’s where I saw the British film “Oliver!“, so the holiday and soundtrack are permanently merged for me. 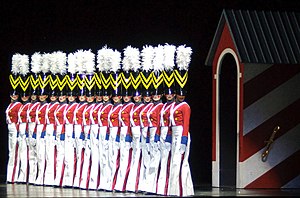 The Radio City Rockettes perform the March of the Wooden Soldier at the Christmas Spectacular in Radio City Music Hall (Photo credit: Wikipedia)

I can still sing bits and pieces of many of the songs (a very weak version of “Where is Love?”; a terrific cover of “You’ve Got to Pick a Pocket or Two”). The film’s showstopper is “Food, Glorious Food.” Poor Oliver and the orphans are tortured by the sights and smells of the governors’ banquet in the workhouse. Oliver has the audicity to request another serving of gruel. “Please sir. May I have some more?”

More is what you get at the holidays, particularly when it comes to food.  There’s a reason Weight Watchers and Jenny Craig blast their ads in January. We’re all feeling like the fatted pig by then. However, if you’ve still got some room, I’m suggesting you head out to a lavish meal at a restaurant known for its holiday decor before the season of shame is upon us.

Go to the restaurant in your town that’s bedecked, bedazzled and bejeweled beyond recognition. Every place has one; NYC has several. Rolf’s in Gramercy is particularly infamous for its over-the-top holiday decorations. This year we headed to Westchester, to Mulino’s in White Plains, a classic Italian restaurant catering to the city’s business clientele (translation: prices are 2x what they should be).

Colossal Shrimp – both the prawns and price are outsized.

But it’s worth it.  Every inch of the place is adorned and the waiters are fantastic…I think their accents are authentic and they know how to flirt with the ladies and flatter the gentlemen. It’s truly a wonderland.

Most of the tables feature a view of the garden, populated with illuminated figures.

If you can’t get a dinner reservation (Entirely possible. They were able to squeeze us in at 4:30.), enjoy a drink at the bar and watch Santa, the elves and reindeer strut their stuff.

The best part of all? The restaurant sets up a wood-fired roaster outside the door and departing patrons receive a bag of hot chestnuts.  It’s beginning to smell a lot like Christmas.

Tell us about your favorite holiday restaurant. What makes the experience memorable for you?

More from The Open Suitcase

When I’m not on the road, I spend time recreating my trips at home, through decorating, food and crafts. And, since I’m a woman of a certain age, I focus energy on staying of sound mind and body. Thank you for stopping by. Please let me know what you like and what you don’t, via the post comments or contact form. Read more...

« ‘Tis the Season for a Giveaway
Nice Place to Visit But Would I Want to Live There? »
Subscribe
7 Comments
Oldest
Newest Most Voted
Inline Feedbacks
View all comments
The Palladian Traveler

For the last several years, I’ve spent the holidays down in Rome and my favorite holiday meal is the one prepared over at my co-inlaws’ place: Abbacchio Scottadito (grilled lamb), the only way that I’ll eat it and it’s to die for.

0
Reply
The Open Suitcase
Reply to  The Palladian Traveler

Love Rolf’s! Great all year round when you’re in need of some cheer.

What a fabulous post!
I have nominated your blog for the Illuminating Blogger Award …for details go to
http://brissiemaz.me/2013/01/04/the-illuminating-blogger-award/
Congratulations!….I hope you have the time and the inclination to accept the award …..there’s no time frame involved.
Best wishes, Mary 🙂

Lillie’s NYC. The restaurant/bar is adorned with Victorian furnishings all year round; but, for the holidays it is as if St. Nick spilled his bag of tinsel in your figgy pudding and sugarplum fairies danced on the bar in England circa 1842.

We’ll have to go! Put it on the calendar for December 2013…YIKES!

Traveler. Writer. Wife. Mother of 3. Friend. Dabbler. “The thing is to have a life before we die. It can be a real adventure having a life” – John Irving, “The World According to Garp” Let’s Talk!

Subscribe To My Newsletter And Get The Latest Updates!

You have Successfully Subscribed!