I swear I could HEAR my daughter’s eyes roll back in her head when I suggested we stop by Emily Dickinson’s house after touring UMass Amherst. I explained that I feel personally responsible for supporting these types of museums. If old English majors don’t visit Emily’s home and other important literary sites such as the House of the 7 Gables and Poe’s grave, then, really, who will? She conceded, if I promised a sweatshirt in return. Deal.

I enjoy touring college campuses, at least I did, the first 4 or 5 times. After awhile they begin to blend, like Caribbean cruise ports. Since precious vacation days must be spent on this important teen/parent bonding activity, I long ago began to package the campus visit with an unrelated sightseeing adventure. The Emily Dickinson museum is the perfect detour if you’re spending the day at one of the schools that comprise the 5 College Consortium:  Amherst, UMass, Hampshire, Mt. Holyoke or Smith.

The Dickinson houses are operated as one museum offering two different guided tours, a 90-minute one that includes the Homestead and The Evergreens (brother Austin’s house) or a shorter, 45-minute one. Our docent was a trim, somber woman who could not believe my daughter’s lack of interest in the Emily Dickinson Poetry Marathon. Who could possibly pass on the chance to read all of the Belle’s 1,789 poems in one sitting?

The path between the Homestead and the Evergreens.

Emily’s house tour includes the parlor, library and bedroom where she’d sit in the evening at her tiny writing desk and haul out the bits and scribbles that she’d tucked in her pocket throughout the day. You’ll learn little fun facts about the poet; for example, she was a prize-winning bread baker. What you won’t hear though are any of the salacious stories about the family, like those told in Lyndall Gordon’s “Lives Like Loaded Guns.” Apparently, Brother Austin routinely violated the Homestead’s living room couch with his paramour, Mabel Todd. Our guide only mentioned that it had been reupholstered. The tour concluded with a brief discussion of Emily’s poetry, comparing her freestyle verse to the more structured work of contemporaries like Emerson. When asked to read “I’m Nobody” out loud, I know my daughter considered vaulting through the window.

Besides the sweatshirt, I offered compensatory cuisine – lunch at The Lone Wolf, one of Amherst’s excellent independent restaurants. She scarfed down chocolate chip pancakes while I enjoyed an Eggs Benedict Florentine. The restaurant’s open 7 days a week until 2 p.m. and, in addition to traditional breakfast fare, offers a number of Southwest and vegan options.

Dickinson’s poetry was a relief to me after hours spent fretting about rhythm, meter and scansion. Her work is accessible and true.  My favorite line is “To live is so startling, it leaves very little time for anything else.” – Emily Dickinson 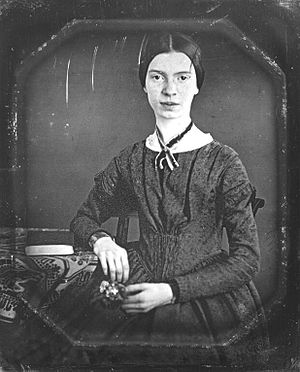 More from The Open Suitcase

When I’m not on the road, I spend time recreating my trips at home, through decorating, food and crafts. And, since I’m a woman of a certain age, I focus energy on staying of sound mind and body. Thank you for stopping by. Please let me know what you like and what you don’t, via the post comments or contact form. Read more...

This is on my list of places to visit! Thanks for the preview. I also appreciated hearing your daughter’s reaction! I met a woman last year and told her of my interest in visiting historic homes. She said (somewhat disgustedly), “Oh, you are one of those sign readers.”

I don’t get it. Your blog is all about the why-not of getting out and mine is about the why of staying home–I travel as much as the belle–still you write well, I’ll check back here ever once and a while.
By the way here’s my view on emily (http://wp.me/pkcvH-gT) if she’d ever gotten to france.
Thank you for the like may I ask why?

Thanks for the visit – there’s nothing wrong with interior journeys…they’re just different.
As for the like – I was scrolling through the Reader this morning and liked your art. Liked your description even more. And love the Dickinson portrait.

I don’t have a favourite line, but “I felt a funeral, in my brain” made an impression! Thanks for the like on my blog 🙂

My best friend from my undergrad days and I love visiting historic homes. I could barely contain myself when we went to view Emerson’s study at the Concord Museum. We then took the docent-led tour of his home (located just down the street) a year later. Thanks to your post, I think it’s safe to say that Emily’s house will be on one of our travel itineraries in the near future.

Hope you made it over to Walden Pond when you were in Concord? I think it’s great fun to wander in someone else’s footprints. Glad you feel the same. Thanks for visiting.

Yes, I did make it to Walden Pond. I found a nice spot to relax, and ended up reading a good chunk of Walden while there. It was a marvelous experience – one I plan on repeating. 🙂

Traveler. Writer. Wife. Mother of 3. Friend. Dabbler. “The thing is to have a life before we die. It can be a real adventure having a life” – John Irving, “The World According to Garp” Let’s Talk!

Subscribe To My Newsletter And Get The Latest Updates!

You have Successfully Subscribed!